skip to main | skip to sidebar

Spent the morning in Eugene dealing (apparently unsuccessfully) with the car. Last night, one of the headlights burned out. So I took the car in this morning to get the spark plug wires replaced, the headlights replaced, and got a new set of tires (so I actually have TREAD). I got a couple of blocks away, and the check engine light came back on. So I drove BACK to the mechanic, and the claim was that the wires were not inserted completely. So they did it, cleared the code, and off I went. And within 100 miles, the check engine light was back on, and the car doing its thing again. All of which means, lucky me, I get to do it AGAIN tomorrow.

The car was still running, though, so I continued my drove south out of Eugene, making my way towards Crater Lake National Park. Took some Oregon backcountry highways along the Rogue and Umpqua Rivers. Then I drove into Crater Lake National Park, which was created as the 6th National Park, and is the only one in Oregon. Crater Lake was formed when Mount Mazama collapsed under the force of a volcano, sealing the bottom of the caldera. Water collected, creating the lake. Because the lake is almost entirely rainfall and snow melt, it is some of the clearest water you will ever see. The clarity gives Crater Lake a blue unlike any you are likely to see in nature. I drove around the rim road, stopping at different overlooks. The rock walls drop steeply to the water's edge, as the cinder cone collapsed under the intense heat and pressure. There is a large island that rises out of one end of the lake, created by a later eruption from the crater floor. There are cones in other parts of the lake, but the tallest of them are only large enough to reach just under 500 feet below the surface of the lake.

Just below Crater Rim Drive there is an open space with almost no trees, surrounded on all sides by dense forests. When Mount Mazama blew and collapsed, this area was covered with pumice. Almost nothing can grow in the arid soil, even with more than enough water seeping through the rocks below. For centuries, this stretch will bear the scars of the violence that created the beauty above.

As I left the park, I was driving down towards Medford, Oregon through the forest. I came around a turn, and saw a small deer looking up the road at me. Worried that he would dart across the road, and not wanting to hit the creature, I slammed on the brakes. The deer got spooked, turned around, and scampered off into the forest. He had disappeared into the trees by the time I got to him, keeping intact my streak of hitting nothing larger than a bug.

Tomorrow I'll attempt to deal with the car in the morning, then head up to Grants Pass, and then down US-199, finally getting back to California and the Pacific coast. Then I'll work my way down Highway 1. San Francisco and the end of the road is in sight.

Pictures: Different views of Crater Lake, including a close up to show the color. 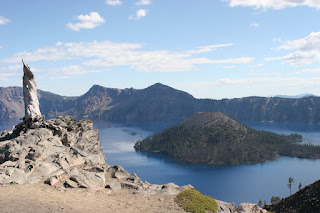 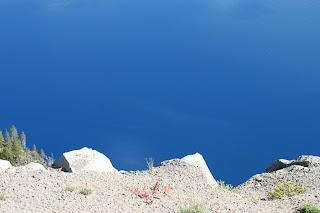 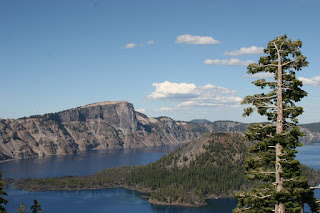 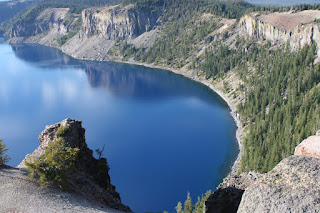 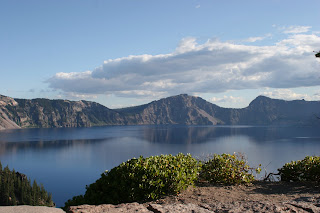